The Embassy of Japan exhibited to promote tourism in Japan at QTM2021 (Qatar Travel Mart 2021), which was held at the DECC-Doha Exhibition and Convention Center in Doha City. During the event, many people visited the Embassy booth and tried on Kimono (Yukata), showing a strong interest in Japanese culture and tourism.

On May 31, Ambassador Sunaga attended the virtual inauguration ceremony of the Qatar Chair launched by Qatar University and Waseda University. The Qatar chair project was proposed after joint discussions with Waseda University during the visit of His Highness Sheikh Tamim bin Hamad Al-Thani, Emir of the State of Qatar to Japan in February 2015, and was established within Waseda University with the aim of promoting academic research and exchanges on various aspects of the Islamic culture.

In his remarks, Ambassador Sunaga hailed both universities for their vigorous efforts and expressed his appreciation for the government of Qatar for its earnest support for the project stressing on the significance of this event that comes as the beginning of the celebrations of the 50th anniversary of the establishment of diplomatic relations between Japan and Qatar.

December 28, 2020, Ambassador Sunaga participated in the One Million Tree-Planting Campaign initiated by the Ministry of Municipality and Environment

On December 28, 2020, upon his visit to Al-Jbailat Park, Ambassador Sunaga participated to plant a tree along with Mr. Mohamed Al-Khuri, Director of Public Parks Department, Ministry of Municipality and Environment, in the ongoing one million tree-planting campaign, which was launched on the sidelines of Qatar’s First International Environmental Exhibition in March 2019. The participation came as part of supporting Qatar’s efforts to combat climate change and promote environmental sustainability.

On October 8, 2020, Ambassador Kazuo Sunaga received a courtesy visit from Mr. Yuki Kobayashi, who is recently joined the Al-Khor Soccer Club at his Residence. Ambassador encouraged him and hoped his future success in Qatar. The board members of the Japanese Society in Qatar also joined the meeting and talked over the information of Qatar life.

Febrary 22, 2020 Japanese Cultural Event at the International School of London

The Embassy of Japan participated in the International Family Food Fair held at the International School of London. At the booth, Japanese traditional toys such as Kendama as well as Kimono were showcased. Especially Kendamas were popular amongst the students attracting many who came to the Embassy’s booth to try the stimulating game. 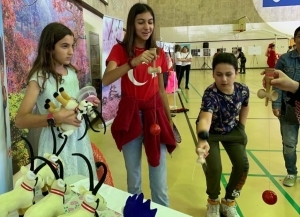 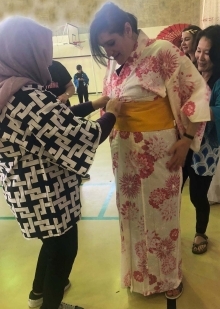 Ambassador Sunaga invited Ms. Junko Nanri, chairman of the “JUNKO Sushi & Japanese Dining”, to his residence to hand over the letter of appointment as Goodwill Ambassador of the Ministry of Agriculture, Forestry and Fisheries, which was awarded on December 25, 2019. Ms. Nanri has opened a Japanese restaurant at Pearl in Qatar since February 2012 and has been committed to promoting Japanese food and its culture for many years. The role of the Goodwill Ambassador is to promote the Japanese food and its culture both domestically and internationally and to actively engage in activities that lead to the expansion of exports of Japanese agricultural, forestry and fishery products.

Mr. Abdulla Al Muraikhi, a member of municipal council in Al Khol, Mr. Toshiaki Hato, Managing Director of Doha Office of Marubeni Corporation, who has been supporting the activities of the Qatar Association in Asa community and Mr. Hamad Ali from Public Relations Department of Qatargas who has been supporting to enhance the bilateral communication in Japan, were present.

Asa town in Japan and Qatar have historical links. When the “12th Asian Games” was held in Hiroshima in 1994, Hiroshima carried out “one-town-one country support” project. It was decided at that time that Asa town would support the Qatari team. This relationship did not end with the Asian Games. The “Qatar Association in Asa" was established in July 1996 with the aim of maintaining friendship with the State of Qatar. The Asa community visited Qatar four times by far. Each time, the Asa community has come with pictures and calligraphies drawn and written by pupils from schools in Asa town.

The Embassy of Japan together with the Japan Foundation set a booth at the 30th Doha International Book Fair at Doha Exhibition and Convention Center (DECC) from January 9th to 18th. At the Japanese booth, various books from Japan such as language textbook, manga, guidebook, books about Origami, Japanese gardens and architecture were showcased. The calligraphy demonstration (name writing service) and origami workshop as well as taking pictures with Kimono face-off board attracted a lot of Japanese fans and there were always long waiting lists at the booth.